A note on factors in regression (in R)

Factors terrify me. I can avoid dealing with them most of the time, but they’re immensely useful in a regression when you have a categorical variable with many levels (e.g. “Very Bad”, “Bad”, “Good”, “Very Good”). A common example in economics is when you have a difference-in-differences design and you want to estimate how the treatment effect changes over time, before and after the treatment period. 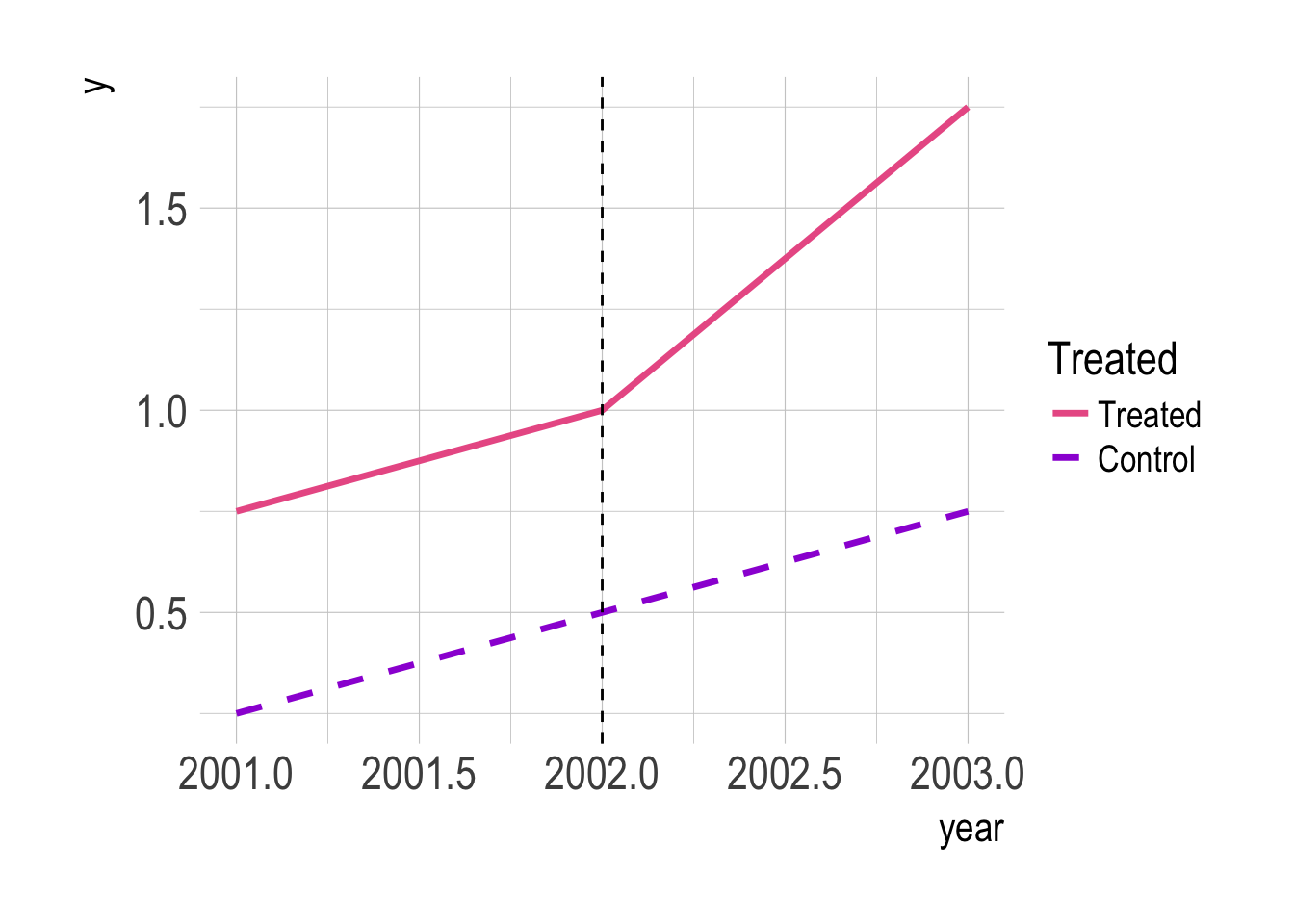 Normally what we want to do here is estimate a separate “treatment” coefficient for the year before treatment and the year after treatment after including person and year fixed effects. Another way of putting it is that we want to estimate the interaction of the treatment variable and the year variable. Since there are 3 years and the treatment is binary, that results in a factor with 6 levels (2001-treated, 2001-control, 2002-treated, …), but only 2 levels are identified. In this example, the pre-treatment coefficient is 0 and the post-treatment coefficient is 0.5.

Normally, we can specify an interaction in the R regression formula with a colon : (e.g. factor(year):factor(treated)), but to help with clarity I’m going to explicitly create the treatment:time interaction variable and call it treat_time.

Another thing to notice is that one level of the factor has already been left out. What we want to do now is tell R to leave out all the other levels of the factor that we know can’t be estimated instead of returning NaN for a coefficient.

Here’s the solution I came up with:

The relabelled factor treat_time_a or treat_time_b now has 3 levels rather than 6. If we run the same regression:

No more warning message! And the exact coefficients we wanted!

Why not create the dummies explicitly?

Another solution is to create dummy variables ourselves for the coefficients we wanted.

Given my active avoidance of factors in most situations, why mess around with them now? The answer becomes obvious when we start encountering this problem in more general settings. For example, what if we have 20 years of pre-treatment data? It’s technically possible to create dummies and you can come up with ways to automate it, but it’s just not really pleasant to work with. Trust me, I tried it for a good amount of time before it dawned on me how to make the factors work to my advantage.

It’s quite possible I missed out on an even better solution given my inexperience with factors, so if you know of one please let me know!